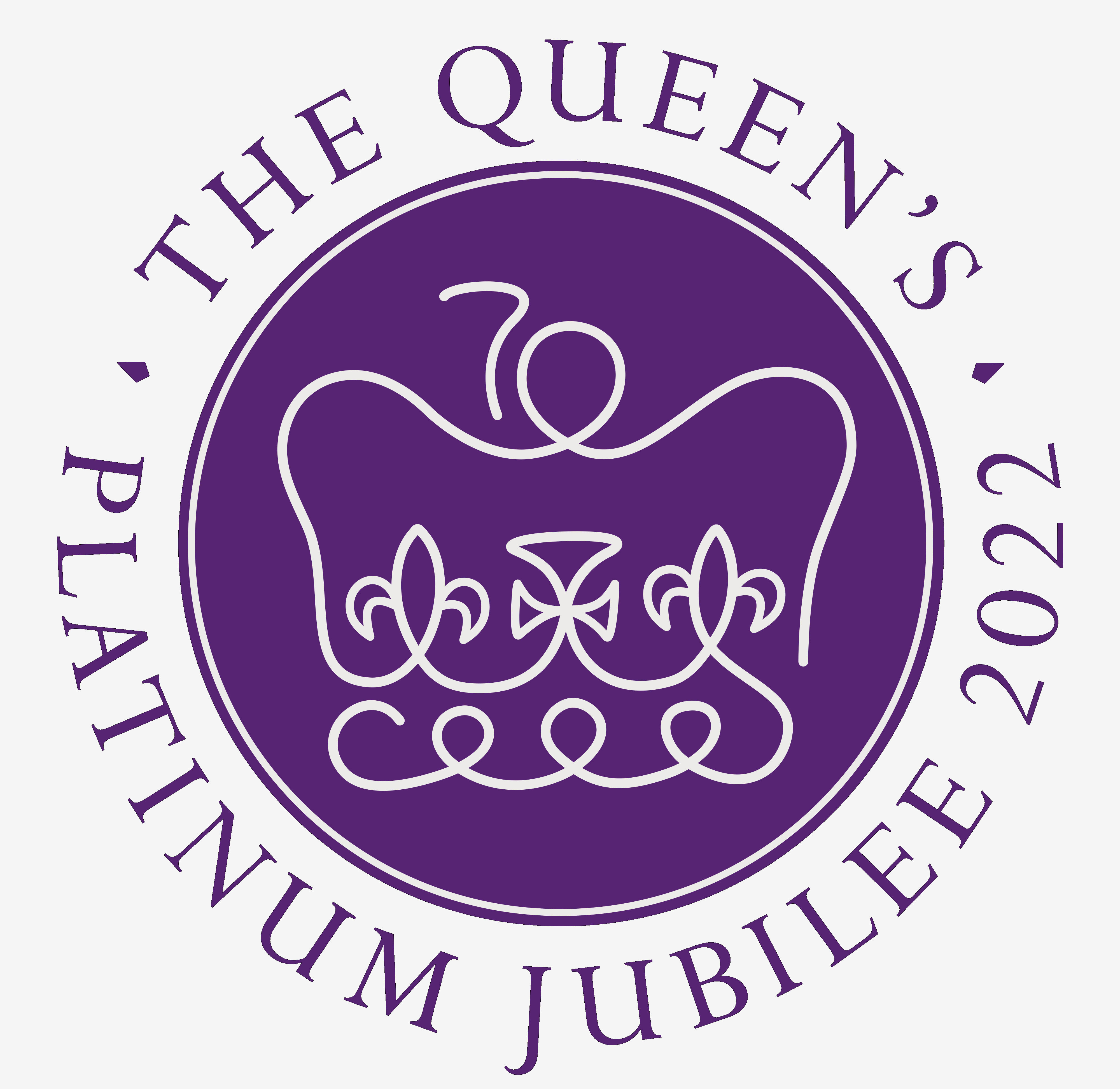 Peasmarsh celebrated Her Majesty's Platinum Jubilee in style on Friday June 3rd at the Recreation Ground. The weather was kind to us, starting hot and sunny and still pleasant after the sun had set.

These are a collection of photographs taken during the afternoon and evening.

Mr Graham Peters, one of the deputies of East Sussex’s Lord-Lieutenant, opened the event just after lunch : 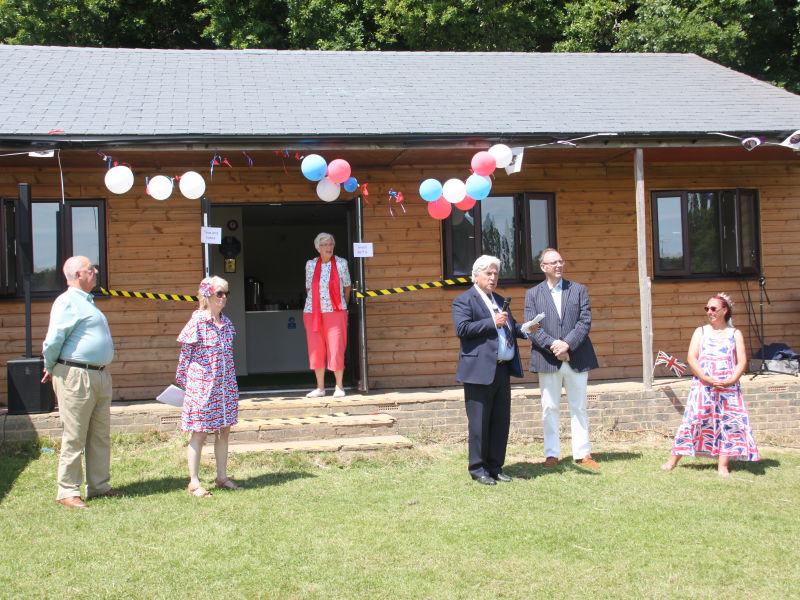 Watching are David, PPC chair, Simon, our compère for the day, plus Sue and Georgie, two of the hardworking organisers of the event [love the dresses girls!].

Mr Peters then went on to cut the Jubilee Cake : 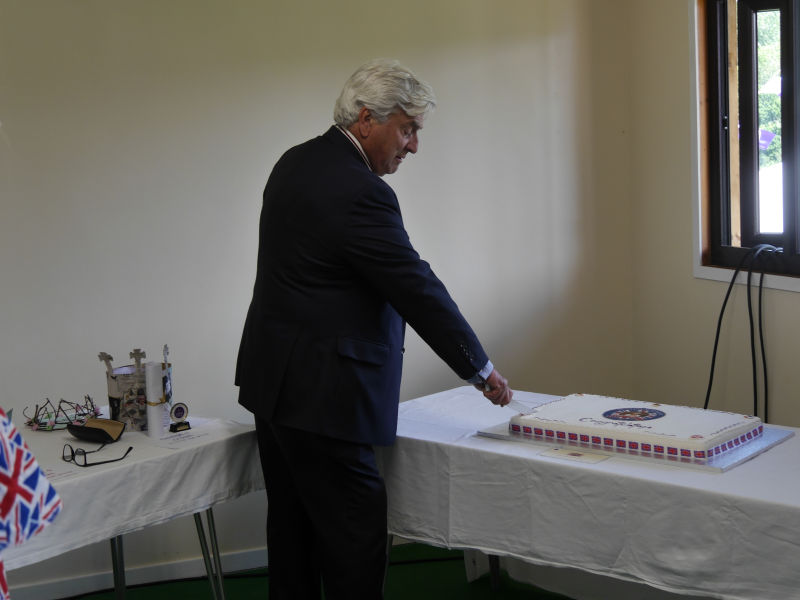 The full splendour of the cake - made by Jempson's - can be seen in the next picture : 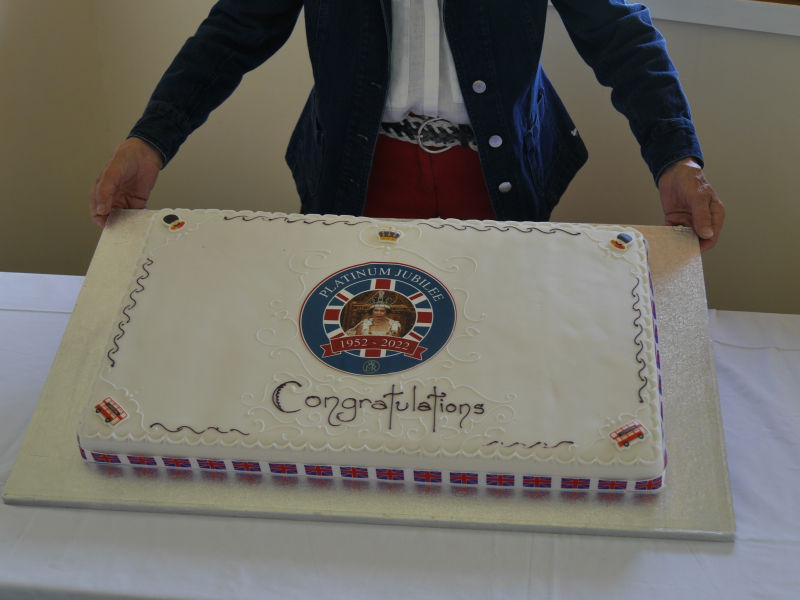 Unfortunately, nobody entered a cake for the Great Peasmarsh Cake-Off but five children did enter the Design a Crown competition : 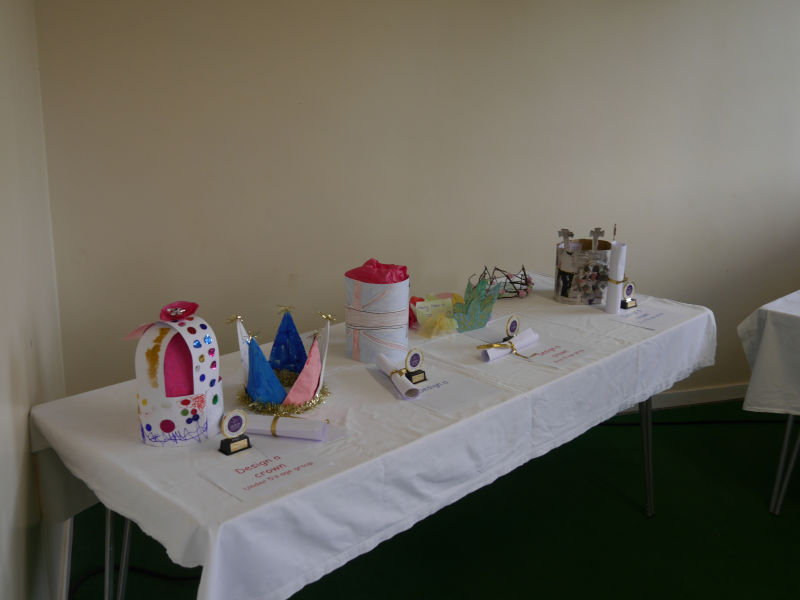 The first entertainment of the afternoon was the majestic Sussex Brass Band : 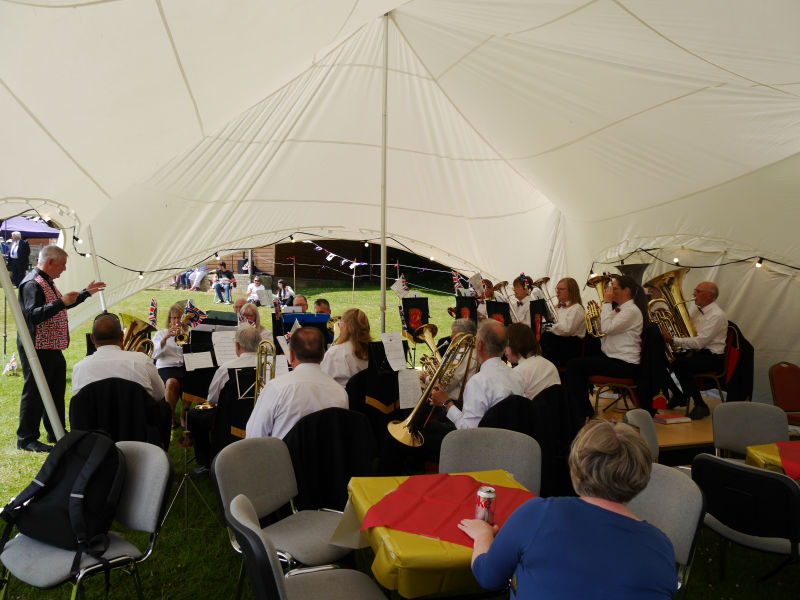 While they were playing, Mr Peters distributed the souvenir coins to all of the children : 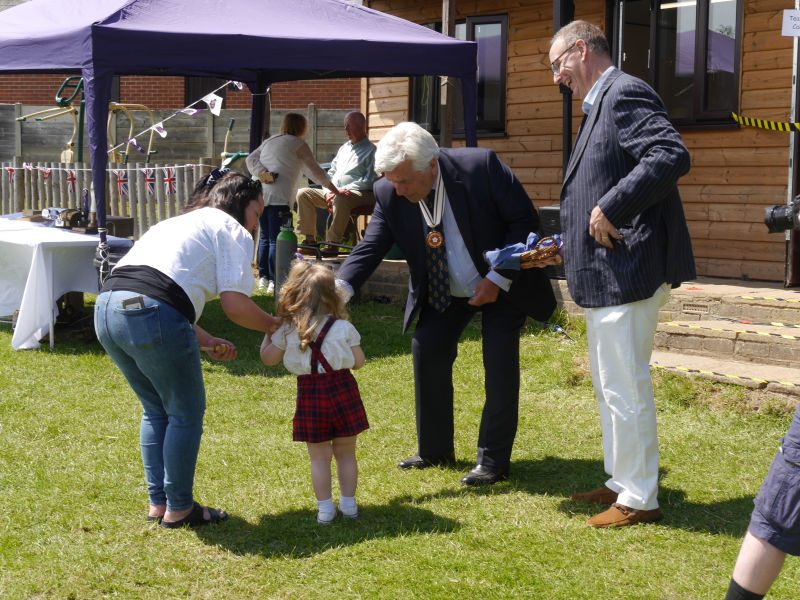 Attractions included a 'water or wine?' stall run by the Friends of Peasmarsh Parish Church : 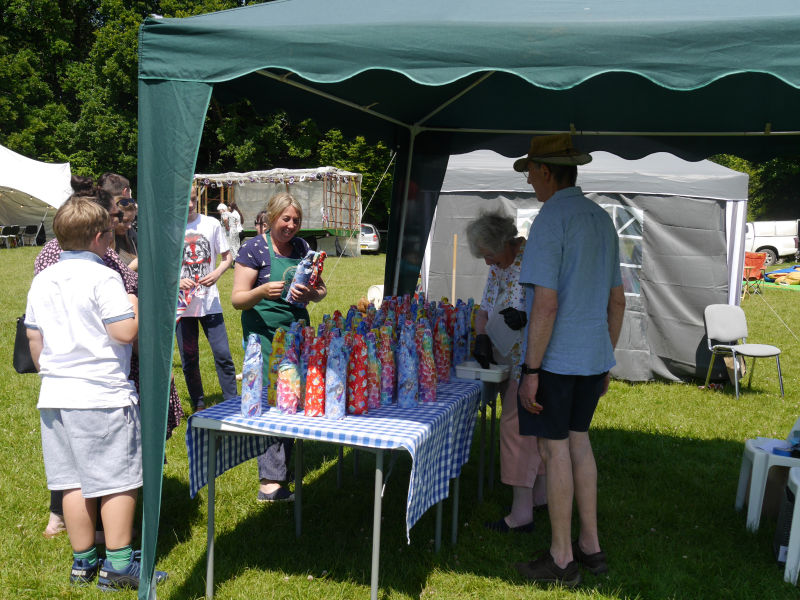 Each bottle could be bought for a pound but they were all wrapped so you didn't know whether you were buying a bottle of wine - or a bottle of water!

Another popular attraction was the Teddy stall : 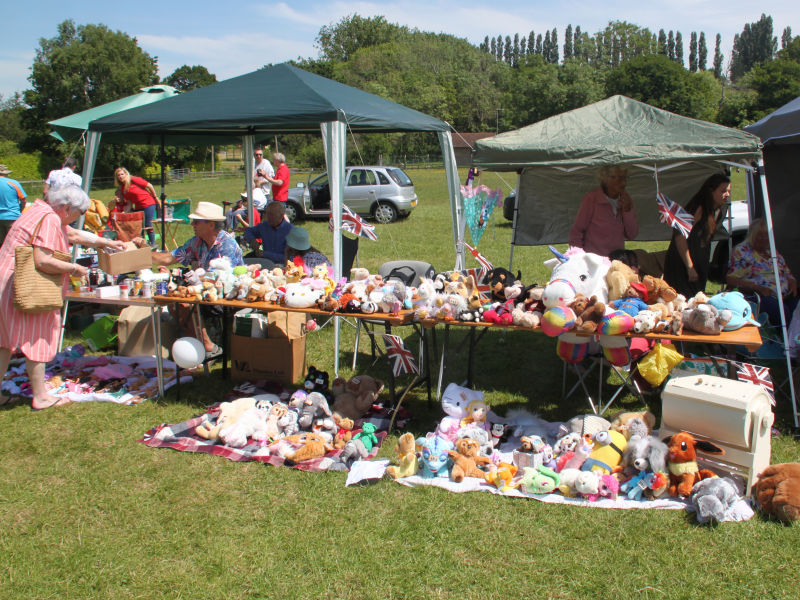 The stall was ably run by Pat, Julie, Natasha, Marie and Ben.

As the afternoon heated up, the icecream van became very popular indeed : 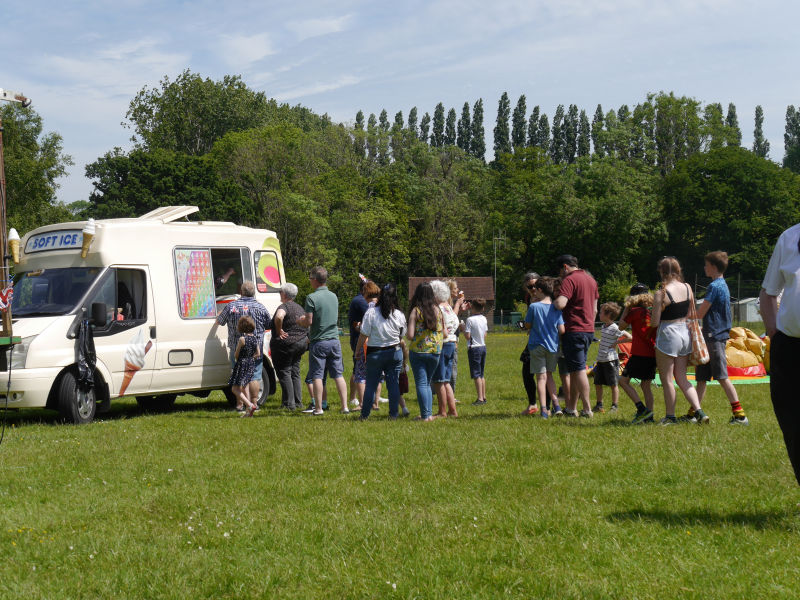 However, the heat didn't stop some people from donning 'sumo' suits to have a wrestling match under the watchful eye of a referee from Westerleigh Judokwai : 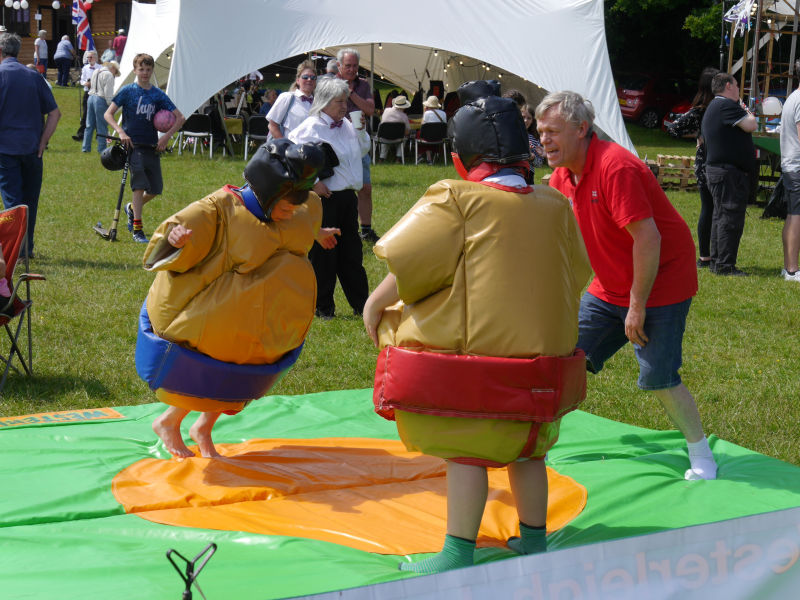 The other popular stall was James and Sophie's 'lamburger' van : 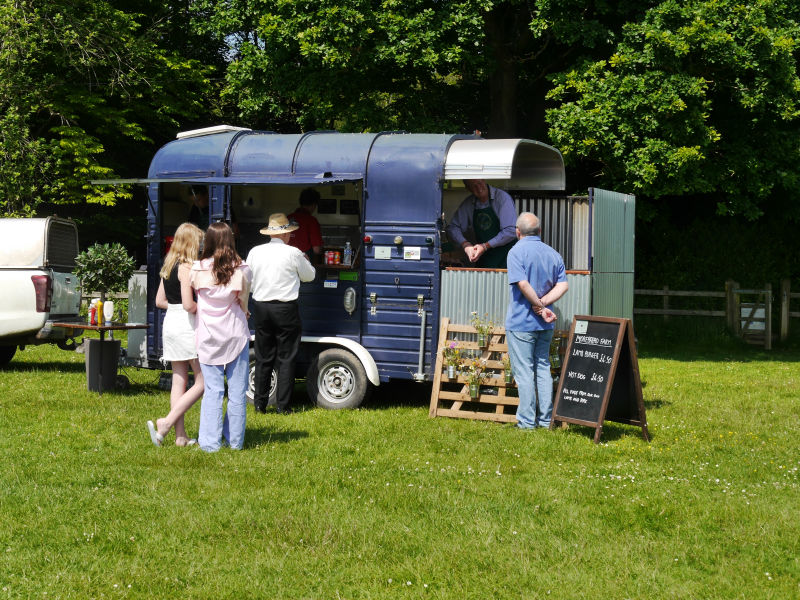 James and Sophie run Morebread Farm up near Peasmarsh Place. They were serving burgers and hot dogs made with their own lamb and pork - sending delicious smells around the field. 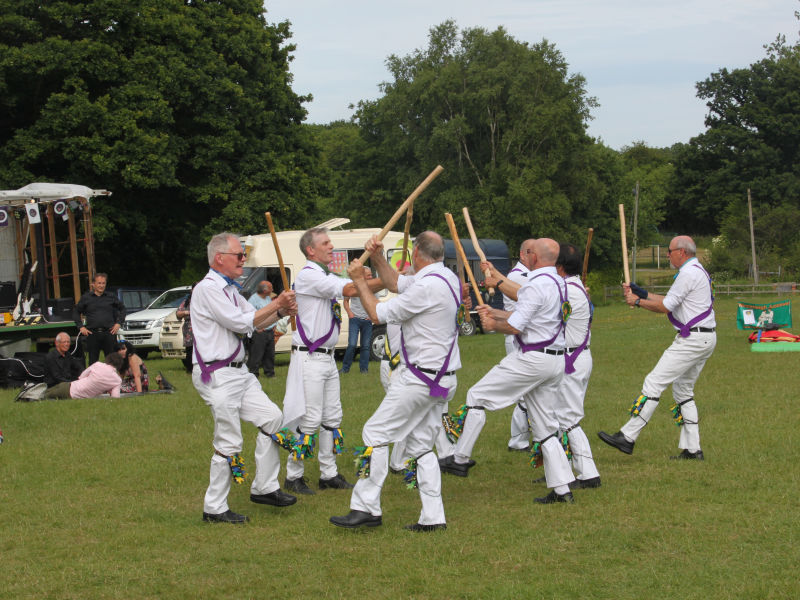 However, they brought along two other groups of Morris Men.

One set was performed by two groups. [Yes, somebody flew the union flag upside down!] : 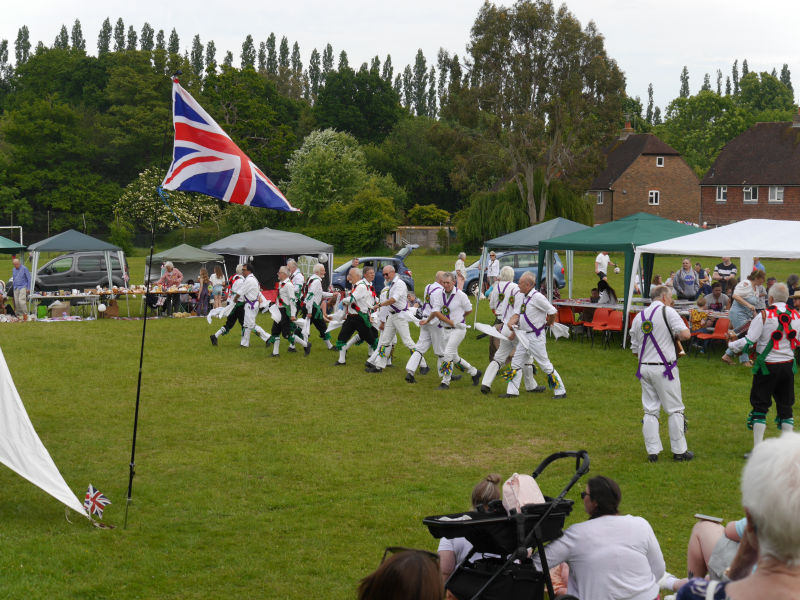 The third group of Morris Men [and Morris Women] came from a completely different tradition : 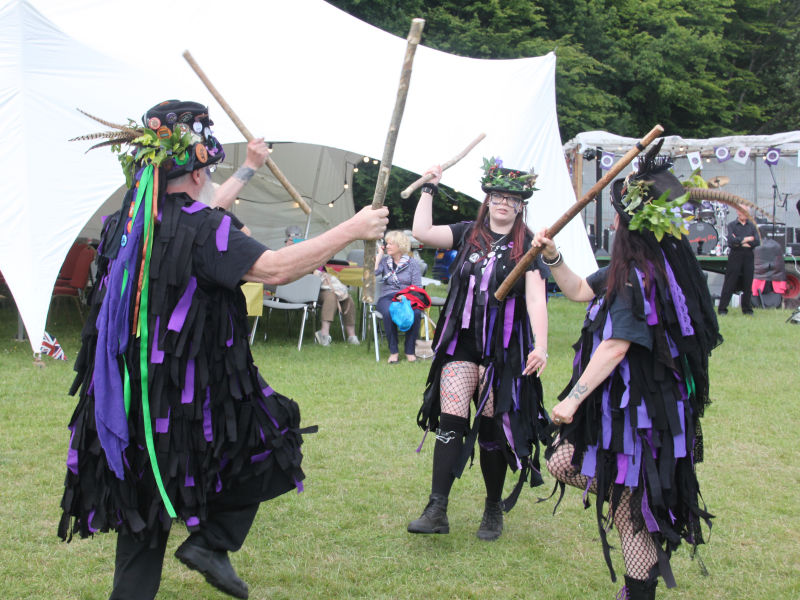 At one point the musicians from all three groups were playing together : 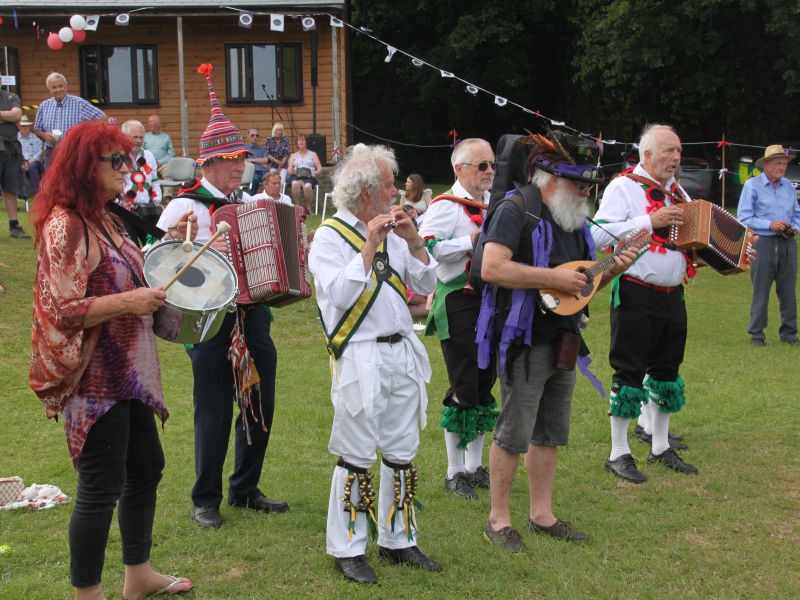 Before finishing their performances, the Morris Men invited the public to have a try dancing : 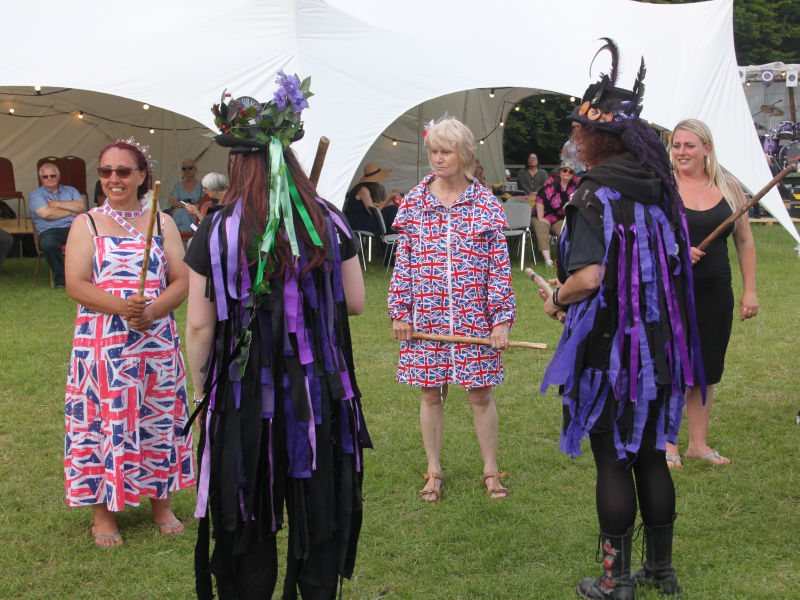 Luckily nobody was hurt by those sticks even though they were used with gusto.

The evening entertainment was a classic rock concert by Something Else, a local group : 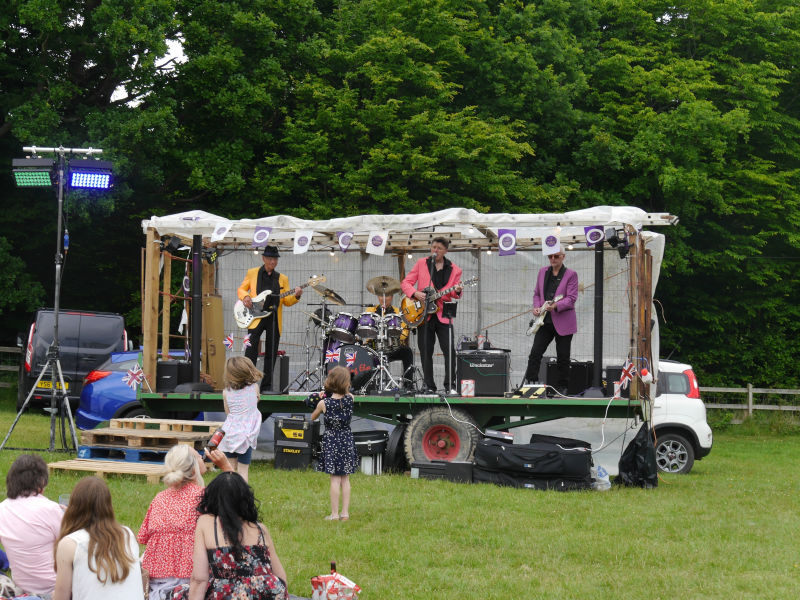 They played from 5:00 until dark and were popular with people of all ages. 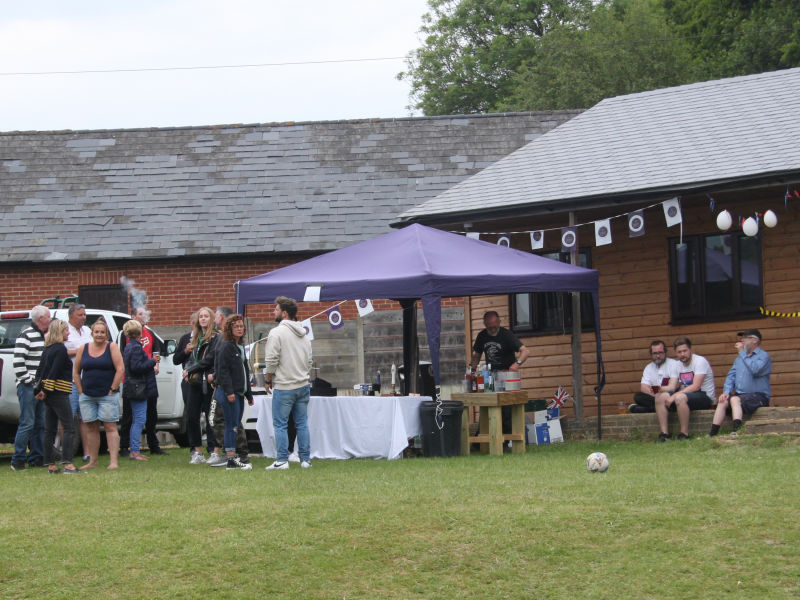 We came close to drinking the bar dry : lager sold out, the Harvey's bitter almost.

And so to the 'thank you's and acknowledgements ...

The event would not have happened without the months of hard work put in by Georgie, Hilary and Sue : many thanks to all three of you. Thank you too to all of the other volunteers who stepped forward to assist in the run-up to, on and after the great day.

Special thanks are also due to Jempson's which provided the cake and the food for the children's tea party, to Morfey's Removals, our local removal company which moved the Memorial Hall furniture down to the field and back again after the event and to all those who donated those marvelous raffle prizes.

Thank you too to all those Morris Men who entertained us without charge.

The following were sponsors of the event, providing cash donations :

The images on this page were taken by various photographers during the event for sharing with the community and donors. They are considered to be innocuous and in compliance with the PPC’s Safeguarding of Children / Vulnerable Adults Policy. However, if you object to any image for any reason please contact the council and it will be removed :

This page will remain in place for the remainder of this year, after which it will be removed at some point.